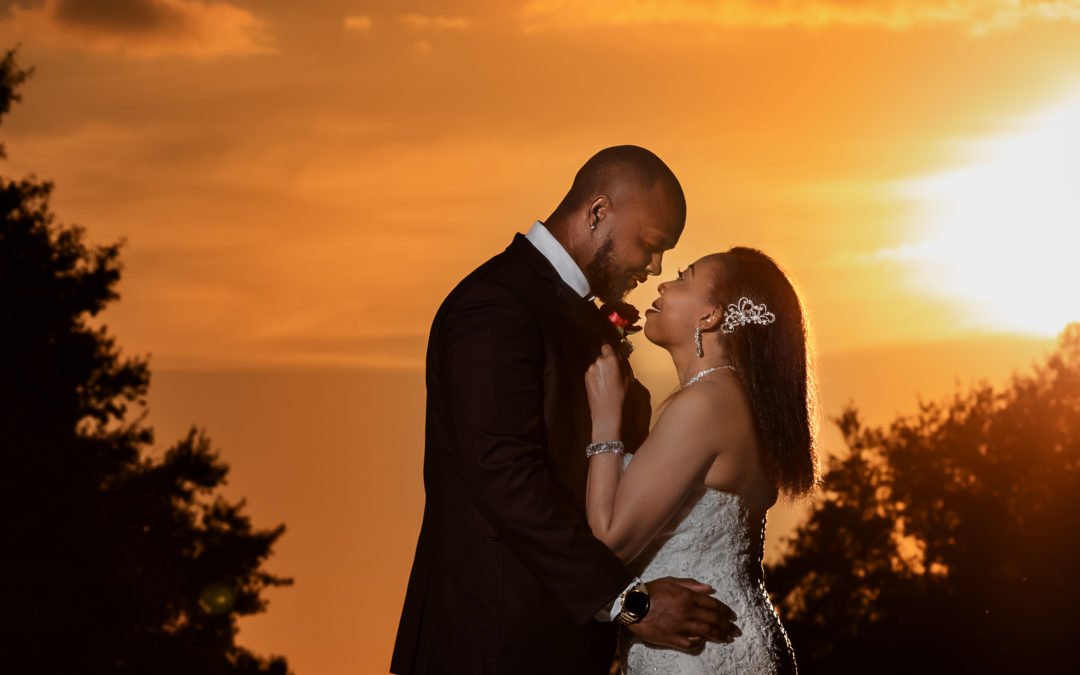 Rosilyn and Chris got married on June 27, 2019 at the beautiful Noah’s of Morrisville, NC. It was a beautiful celebration of love and friendship, with great friends and family. They’re a fun and energetic couple who very much love each other.

Their story is quite interesting. But as we all know, there is ALWAYS 2 sides to a story !! Well The Bride and Groom were tasked with writing their version of how they first met! They were not able to see each others version until it was posted on this site

See below to learn the exciting but different versions…

One particular day I was outside washing my car and a black car pulled up to my neighbors house, so this young lady that I thought I knew got out and walked to my neighbor’s door. So I started talking to her, I’m thinking she is my neighbor’s sister the whole time she was standing at the door waiting for my neighbor to come out side, but I knew something was wrong because she was making weird faces at me.

So she went in the house and I continue to wash my car, so 10 mins after that her and my neighbor came back out side and was like Chris this is my friend Rosilyn. I was like, I thought that was your sister and started laughing. So later that day I invited them both to my mother’s birthday party and of course Rosilyn came and we dance once.

Later that night I was outside the party talking to my uncle Buddy and Ros was walking by with my neighbor getting ready to leave for the night so I stop her in her tracks and asked her if we could get up sometime and plus I would cook for her and she said yes and she been hooked on Mosley😎 ever since.

My life changed forever on Saturday, April 18th, 2015…. I agreed to attend a birthday party with a close friend in Garner, NC.

As my friend and I were walking into the party, Chris and I locked eyes, and for a brief moment a weird feeling took over me. I shook it off.

Throughout the night I noticed him eyeing me HARD, finally he asked me to dance.

While we were dancing, we had small talk (he said – I have not seen you around, where are you from…are you single, etc). Once I put my moves on him, he could not keep his eyes off of me.

Throughout the night, he continued to check on me to make sure I was enjoying myself. Chris saw me leaving, and he was not going to let me get away (he sprinted after me, knocking over chairs and bumping into people).

He caught up with me outside and stated he would like to get to know me better over dinner and offered to prepare the meal.

I agreed and gave him my phone number.

He called the next morning and we talked for hours. Day in and day out, we talked ALLLLLL day, I got really good vibes from him. I went over to his house weeks later for the dinner he offered to prepare; he was a complete gentlemen the entire time I was there.

We became very fond of each other as the months progressed and decided to be in an exclusive relationship. We just could not seem to get enough of one another, fast forward a couple years and here we are planning to spend the rest of our lives together fully committed to each other.